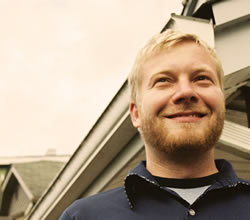 Carl Berg became interested in carpentry shortly after visiting his first work site at the tender age of seven; six years later, he would trim out his first door, coinciding nicely with his natural aptitude for basic calculus. Enrolled in home schooling, he initially majored in dishwashing – with a minor in delivering local newspapers – but his focus soon shifted to the time-honored art of finish carpentry.

Carl launched his first commercial venture at the age of twenty-two, partnering with his father and younger brother. The exploit proved entertaining, yet mostly unsuccessful. He later picked up stakes, moved to Seattle, and kinda sorta grew up after assuming the role of superintendent and lead carpenter at a local, high-end, residential remodeling company. While there, he managed to help enhance the company’s reputation for quality control and customer service by faithfully administering high-value projects, and by continuously working to cultivate his artisan trade.

Carl now lives with his wife in the lovely Highland Park neighborhood in South Seattle. He spends his free time appreciating the fact that he has a very understanding wife, and contemplating the next band he’ll quit. He is possessed of a fairly liberal sense of humor; that said, he tends to keep a pretty low profile while on the job. He has a great many opinions he will never share with you, unless you share your wrong opinions with him first.